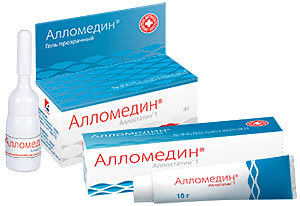 There are no analogues. In the case of combating herpes , it is possible to use antiviral agents and immunomodulators , although they differ in the mechanism of action.

Where can I buy:

Allomedin is a fundamentally new antiviral drug, in which the qualities of natural alloferon are enhanced by innovative solutions. 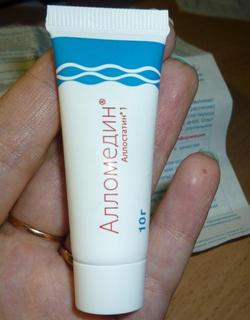 This gel protects skin and mucous membranes from a variety of viruses that provoke inflammation and the appearance of unwanted tumors.

Allomedin treats herpetic and papillomavirus infections (regardless of the site of the lesion), genital warts, and warts and molluscum contagiosum.

The gel is able to quickly return a healthy look to the skin if the herpes does not have time to spread: herpetic eruptions disappear together with swelling, itching and burning. But if you do not manage to seize herpes at the initial stage, the treatment will take about a week.

Allomedin is lubricated by diseased areas: it is immediately absorbed, protecting and restoring the integrity of the skin and mucous membranes. The duration of treatment depends on the complexity of the ailment:

When starting treatment for herpes, one should also take into account the location of its localization: 2-3 days on the labial (on the lips), twice on the genital one. Complete regeneration of the skin and mucous membranes may take some time: in this case, the use of allomedine continues. 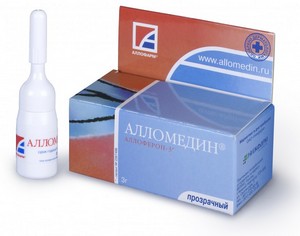 If there are prerequisites for the onset of herpetic rash (cold, stress, prolonged exposure to the sun, visit to a cosmetologist, drinking), you can resort to preventive measures: apply allomedin to the wings of the nose, lips and other parts of the epidermis.

Individual intolerance of the gel components is possible. Use for the treatment of children can be recommended by a pediatrician.

Pregnant and lactating patients should consult a doctor before using the drug.

Such cases in medical practice have not yet been fixed. 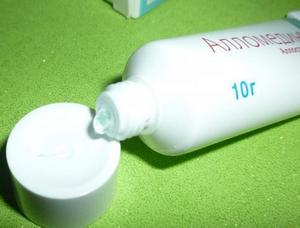 Allomedin is based on the peptide allostatin and a number of components that are readily used in cosmetology and medicine: water, allantoin, sodium hydroxide, phenoxyethanol, carbopol and ethylhexylglycerol.

It is on allostatin that the mission of recognizing the affected cells of the dermis is entrusted, after which it initiates a protective reaction blocking the "sprawling" of the virus. The peptide does not harm healthy cells: its task is to destroy the "invader" and start the process of regeneration of the epithelium.

In a complete factory packing, the hydrogel is stored for no more than 2 years. Storage temperature from + 2 ° C to + 8 ° C. After the package is opened, the gel should be used within 14 days, a maximum of 30 days, not allowing it to dry out.

Allomedin refers to mild dosage forms: it is a colorless hydrogel with a specific odor. It is produced in a tube (10 g) and in a plastic tube (4 g).

The hydrogel is applied without difficulty to the infected areas, leaving no stains on clothes and traces on the skin.

If the gel caused an increase in rashes, it means that the virus has been hiding in the body, and a breach has been breached in the immunity. And this is a serious reason to call an immunologist.

(Leave your feedback in the comments)

For Allomedin I grasp, as soon as I feel the first signs of approaching herpes: burning and twitching. This gel does not disappear from my home medicine cabinet - I take it out and smear my lips. Herpes does not have time to manifest itself in all its glory: one day and it as it never happened. I suffer a cold on the lips from school, but allomedine is the first, really effective drug. He perfectly copes with herpes. Irina, Magnitogorsk
The cold on the lips pops up several times a year. Allomedin was recommended in a pharmacy. Herpes now appears much less often: about once a year. My personal advice is to start applying the gel every two hours, as soon as you notice the initial symptoms of the infection. It does not hurt to add any anti-inflammatory drugs. Then everything will pass without consequences and very quickly. I store it in the refrigerator - always at hand, and the packaging is compact, convenient. Oleg, Kaliningrad
[/ Su_quote]
Allomedin bought it today and immediately tried it. This is the best thing I've ever tried to treat herpes. To be honest, I already decided that all medications are useless. I endure my verdict: it's a miracle ointment! Herpes spread not only the lip, but also the skin above - I applied a gel, and after five minutes passed a terrible itching along with the drawing pain. The bubbles ceased to inflate, and the old ones were quickly blown away and tightened with a crust. With other ointments, this effect was on the third day, not earlier. Thanks to my friends who advised me this gel, adding that they are the only ones who are saved from herpes. Anastasia, Vologda

Leave your feedback about this product. Cancel reply